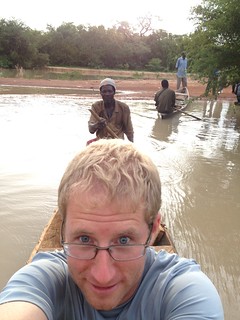 Kelsey Timmerman is a traveler with a writing problem. He met the agent who sold his first book, Where Am I Wearing? A Global Tour to the Countries, Factories, and People That Make Our Clothes at the Midwest Writers’ Workshop in the summer of 2007. Kelsey’s latest book is Where Am I Eating? An Adventure Through the Global Food Economy. His writing has appeared in publications such as the Christian Science Monitor and Condé Nast Portfolio and has aired on NPR. Kelsey is also the co-founder of the Facing Project, a nationwide storytelling project that activates writers to tell stories that strengthen community. He has spent the night in Castle Dracula in Romania, played PlayStation in Kosovo, farmed on four continents, taught an island village to play baseball in Honduras, and in another life, worked as a SCUBA instructor in Key West, Florida.

Kelsey will be leading the  Part I nonfiction intensive at MWW. We caught up with Kelsey for this week’s E-pistle.

MWW: At MWW you are teaching a nonfiction intensive session titled “Turning Real Stories into a Real Career.” Could fiction writers benefit from this intensive as well?

KT: Totally. I’m jealous of fiction writers because they can travel between their ears where they aren’t threatened by deadly venomous snakes, paramilitary forces, and Ghanaian death buses, all of which I have encountered. Also, it’s a heck of a lot cheaper. But from a career perspective, I often feel sorry for fiction writers. There are way fewer places to publish fiction. Nonfiction is always about real-world issues. However, fiction writers can leverage their real-world experiences and research surrounding these issues to get published in magazines, newspapers, and other outlets. Each published clip, besides being a great ego boost, is another shiny thing to pepper in your query letter to a future agent or editor. Nonfiction writing builds an author’s authority and platform. It also is more likely to pay! All writers can benefit from writing and publishing non-fiction.

MWW: Walk us through your path to publishing.

KT: I graduated with a degree in anthropology, which I quickly put to use as a SCUBA diving instructor and world traveler. I started to write about my experiences and shortly after had a weekly travel column in the Key West The Newspaper. I got paid $0 per column. It was the world’s most expensive hobby, and I love it! That column was my grad school. I had to write 1,000 publishable words every single week. It was my reason to write. (In my session we’ll be exploring our individual reasons to write that keep us writing.) After two years of writing the column, I reworked some of them and they got picked up by publications that people had heard of and that paid. And then, of course, I went to Bangladesh because my underwear was made there and I wanted to meet the people who made them. This was followed by trips to Cambodia, China, and Ethiopia. I had an agent interested in my Where Am I Wearing? idea as a book, and then I met another agent at my first MWW, with whom I eventually signed. A few months later, I had a book deal. Three months later I finished the book. A year later that book was out, and suddenly, after eight years of working at the writing thing, I had a career as a writer and as a speaker. And because everyone always wants to know. . . . Yes, this is what I do for a living.  I support my wife, who is the real hero in all of this, and our two kids.

MWW: You’ve been a column writer, freelancer, author, and speaker. Is it important for writers to diversify?

KT: You bet! I looked at my career as a multi-front attack. I advanced the column thing as far as I could, and then I shifted to freelance work. Freelance clips led to books, which led to more freelancing work and speaking engagements. They all feed one another. Yet, if I would’ve said, “I’m only a columnist,” and given up when my travel column literally  had been rejected hundreds of times, I would be living someone else’s dream. You are a writer. You aren’t just a fiction writer, a YA author, or a literary journalist. You are a storyteller.

MWW: What will students walk away with from your intensive?

KT: I’m not sure this has been done before at MWW, but I will personally give you a, “you’ll get published guarantee.” Every attendee will leave with clear goals and a plan of attack to execute those goals. If after one year, a student believes he or she followed the plan and has not been published, I will personally reimburse them the $150 fee for Part I.  (Note this isn’t an MWW guarantee; in fact, Jama will probably try to talk me out of this. This is me paying you back if you aren’t happy.) You. Will. Get. Published. I guarantee it! The bar for nonfiction writing is rather low.  We’ll talk about how to exceed expectations and share a few tools from fiction writing. We want your work to stand out. You have to write well before anyone will publish anything. Next, we’ll explore why you write, and how to discover your unique areas of expertise. And then, we’ll lay out a plan of who you’ll pitch (agents, newspapers, magazines, websites, etc), how you want to be published, and set tangible writing and career development goals. We’ll work through a writer’s business plan and we might even bust out a spreadsheet or two. Writing careers rarely happen by accident.

MWW: What are you looking forward to the most about this summer’s conference?

KT: I grew as a writer by attending MWW, and I really enjoy watching as others grow their love for writing and their writing careers. For me, the conference is less of a workshop than it is a family reunion. I’m looking forward to catching up with old friends and making new ones. Connect with Kelsey:  Blog / Twitter / Facebook

Being brave is part of chasing your dream of being a writer. Be brave. Register today for #mww14!

Part I Intensive Sessions are filling up! Don’t miss this outstanding faculty, this information-packed schedule, this opportunity to pitch to agents, this time of networking and participating in all that is the MWW Community. Register today!